Putin’s Disaster and What Could Happen Next

California says it needs more power to keep the lights on

NOPEC: America’s Last Stand Against OPEC’s Drift To The East

Not really a thrift store home and not a completely salvage home. But a kind of a middle ground between primitive and purchased high end solutions.

I have been wanting a saw to keep in the car in case the road was blocked with fallen trees and I really wanted to get home. The main thing that has been preventing me is the thought that you can’t get a saw big enough to do any good without having something too big for a car. But I heard a lot of good things about about Silky Saws so I decide to give them a try.

Shortly after my Silky “Big Boy” was delivered to my house a chance to try it out came in the form of a top of a pine tree falling across one of my mother’s trails. Normally I would have got out the chain saw for a task like this but it was cold and I did not feel like fighting with the saw to get it started. My original goal was to the do the bare minimum of cuts so that I could easily toss everything into the brush. But when I got to cutting I was so amazed at how easy it was that I started cutting it into smaller pieces just for the fun of it. It is certainly no chain saw, but I have no doubt it could handle lot bigger trees then what I was dealing with in this picture if I needed it to. The official instructions tell you it is only recommended up to 8″ but I have heard you can go a lot bigger then that in a pinch simply by cutting from two sides instead of only working one cut. 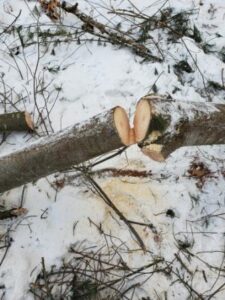 The total time it took me to cut everything up into the neat little pile below was 26 minutes (and I did time myself with the stopwatch function on my phone). A chain saw would have been a lot faster if I already had it out and running. But I am not it all sure it would have been faster to get a cold chain saw up and running just for a small job like this. 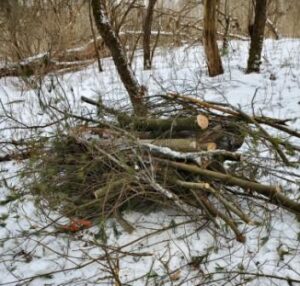 From my perspective, the best part about all this is that it was done with a saw that is only 16″ long folded up. That is not a big deal to stash in a car or stick in a backpack. Of course, if it could not do anything, it would just be wasted weight no matter how small. But since it evidentially can do stuff, I am pretty pleased with it. Granted, one job does not give it a long track record, but it does help confirm all the good things I have heard about it. Biggest potential downside that I have heard of is that people who are used to push pull saws tend to break them by trying to force them to cut on the push stroke. And I have also heard that you can also break them by getting them pinched in the bigger wood (odds are that is why the manufacture says only up to 8″ wood).

But knowing that I tend to be hard on tools and being scared by the stories of people breaking them, I sprung for the more expensive outback version of the saw which has a thicker blade. Since I have never used the regular Silky Big Boy, I have no idea if that was wasted money or not.

And below is the path after I put the last piece on the pile and stopped by stop watch. In case you were wondering if the apocalypses really was upon us. THE FINELY PRESSED, DEATH-DEFYING WORLD OF EXTREME IRONING

The IRS will be requiring a video selfie, submitted through ID.me, for access to its website. Here’s what to know.

If you don’t get the joke, you can watch this.

US, Israel divisions on Iran spill into open

The US Navy Is Rusting Away

Fearing a loss of highly skilled workers, groups representing large and small defense firms are pushing the Biden administration to allow employees to take periodic COVID tests instead of getting vaccinated.

Watching this channel introduce me to the concept of the shock rope.