The global balance of payments only adds up if the G-7’s geopolitical rivals are also its bankers.

Liubov Yarosh survived Soviet dispossession, the Holodomor famine and World War II. At 102, she is living through war once again, supporting Ukrainian troops in their fight against Russia’s war of aggression.

China’s nuclear arsenal is likely to more than triple to 1,500 warheads by 2035

‘A gentle calm’: France’s streets once again echo to sound of working horses

This is a good interview with someone who can tell a story .

The power problems of the British people. The drop in electricity production is equal to switching off 14 nuclear power stations.

On the Diplomacy AI

At present, both India and China have 1.43 billion people. The difference is that while China will depopulate and age over the next forty years, during the same time, India will add the same number of people China loses, over a quarter of a billion.

A Canadian Commercial For Assisted Suicide.

In a statement, it said it had not received an official explanation or apology from China, “beyond a claim by the officials who later released him that they had arrested him for his own good in case he caught Covid from the crowd”. And some more on protest signs.

Ukraine as a culture and a people are going to cease to exist in a couple of generations regardless of what Russia does. It was for this reason that I did not believe that Ukraine would fight so hard against the Russians. Why would a nation that was going extinct voluntarily react so strongly to the loss of their sovereignty? I never figured that so many only sons would lay their lives down with their soon to be childless mothers cheering them on. This was one of the things on my mind when I stated in my last post that I have been almost completely wrong about the human element of the Ukraine War. 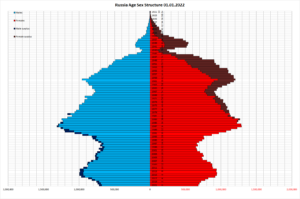 Compare the above graphs with the one below (again you can click on it to get a better view). The below graph is what Russian demographics looked like before the Germans invaded. You can see they had a large cohort of young people just waiting to come on-line and get thrown into the meat grinder. But the above demographics are still messed up. That is because Communists are bad people and they had a great famine followed by a great terror. The below is a more natural population pyramid and it comes from 1929 which is just before the commies really messed things up with famines and terror. It still has a gap in it from Word War 1, but it is the type of population pyramid that the idea of mass conscription was built around.

We have been looking at Russia because it is easier to get historical data. But Ukraine is practically the same. If anything the disappearance of the youngest children is even more pronounced but that may be because Russia has more ethnic minorities still having kids. If you really want a dramatic demonstration of the destruction of the Ukrainian nation (prior to anything the Russia did) click on the below GIF.

This is why when you see videos of the combatants in this war it is striking how many of them are in their 30s or 40s. Neither nation has a choice. If they sent masses of 18 year old’s like the US did in Vietnam, they would not have enough to make a proper army. Even Russia, with its much bigger population, would be at risk of destroying its future if it only sent young people to battle. And Ukraine likely has to destroy its future and pull in older men just to have a chance at staying in the fight.

Long term, it really don’t matter what happens on the battle field. Neither nation is going to be around (at least as we know them today) for very much longer. If you look at the very bottom of both countries population pyramids, there is next to nothing there and that will carry forward into the next generation after that and so on on and so forth. It will only take a couple of generations of that for both nations to have next to nothing in terms of population. And the war will only speed that process along.

RUSSIAN OFFENSIVE CAMPAIGN ASSESSMENT, NOVEMBER 27 If you want a more in-depth look at the defensive fortifications that this update talks about, you can watch this.

Here’s what it’s like when your kids get sick in Québec right now – a long thread.

Where is this chip embargo now?

Side-hustlers who get paid via Cash App and Venmo risk being audited if they don’t report their earnings, IRS warns

This is going on all over China as you can read at this link. Truly a sign of how feed up they are of COVID lockdowns that they are willing to risk this.

Cities across China are ignoring a government edict to ease COVID-19 restrictions as they struggle to contain a surge in infections, which smashed a daily case record Thursday.

The US military operation in Somalia, explained

The Diesel Crisis Is Going Global

The US Has a Bomb-Sniffing Dog Shortage

You can’t make this up. Earlier this month, some dough-faced dork named Sam Bankman-Fried—an MIT grad and son of Stanford law professors—vaporized the GDP of a small country after successfully conning the entire world of so-called educated elites.

Fifteen regions in Ukraine were struggling with water supply problems after repeated Russian strikes against civilian and energy infrastructure.

Flu hospitalization rate highest in over a decade

Flu variant that hits kids and seniors harder than other strains is dominant in U.S. right now

(Warning: This is entirely too long for the level of insight provided. The only real value in reading this is if you are curious as how the brain of the Ape Man works when confronted by a mystery).

I have proven that I have no understanding of the human element behind the Ukraine war. In fact, my understanding is so poor it has been almost a good guide in reverse as to what was going to happen. In other words, based on my past performance you would do well to think that the people involved will act in a way that is the exact opposite of what I think they will do. So why have I been so wrong?

It is tempting to throw up my hands and say that the Russians (or at least Putin) are irrational and that is why their behavior does not conform to my expectations. But even irrational people are predictable once you get to know them. Putin has been around long enough and lead Russia in enough conflicts that I thought I knew what the pattern of his behavior looked like. If you look at the conflicts in Chechnya, Georgia, Syria, and the earlier Ukraine conflicts it seems like a clear pattern becomes apparent.

The pattern seems pretty simple. First you prepare the justification for what you are going to do all the while denying that you are going to do it. Then you use overwhelming force carefully calibrated to be as risk free as possible to accomplish limited objectives. Last, you seek to reach some kind of accommodation that will end the conflict on sustainable terms. Russianphiles would probably argue with first part of this pattern and Russianphobes would object to the last part of this pattern, but to my eyes it still does a pretty good job of describing all of the recent conflicts that Russia has had save the most recent one.